You know when something bugs you enough, you just have to give voice to it. This is one of those moments. I guess I make some pretty big judgments about public speakers based on their ability to answers questions in public forum. Often based on standards I am not sure I could meet, but so it goes. Today, I will play the critic.

Last fall I had a chance to see Tufte speak at his art gallery. I arrived a tad late and snuck into a chair off to the side. He took questions at the end. As he answered each question, my jaw lowered closer to the floor. I slouched down in my seat, feeling defeated. My hero! He was failing me! Later I was able to come back to an appreciation of his work, even if I don’t appreciate his ability to respond to questions. But let’s look for a minute at what triggered me to sit there aghast.

1. Asked a question about infographics for social media, Tufte basically responded that professional journalists do a good job of creating ways to understand this data. This answer completely fails to understand the nature of the medium… the publsihing by anyone should also be data-fied by anyone and not left to the old world of media.

2. Asked a question about infographics for biologists by a biologist, Tufte said that Scientific American and another magazine have great infographics by biologists. For all he knew the questioner was one of those published in said journal looking for more help! He didn’t do anything to narrow down the question to respond to the specific needs of the person asking, and thus made a vacuous circuitous answer that provided nothing of value. And it took him seven minutes of pontificating to do it.

Part of this issue is that many of us are not good at asking questions. It isn’t just Tufte being dull.

A few weeks ago I had the pleasure of seeing the totally fascinating Alain de Botton speak on his latest book, Religion for Atheists. First, let’s be clear that Alain demonstrates fabulous speaking talent. His stories are delightful, the logic of them disruptive and curious, and the pattern he uses is both refreshing and at the same time clear enough that you know that you too can repeat what he is doing with other cases you think of. The success of his talk comes from the alignment of layers of skill. He asks interesting questions that makes you see something familiar in an unexpected way. He selects stories that take you on a journey of experiencing to see for yourself. He has an emotionally engaging and comfortable presentation style that works for his presence of being. All those things we love in a compelling speaker, and more than that he can answer questions. Or things that are offered as questions but aren’t indeed questions.

Let’s make a list of all the fascinating car-wreck ways to “ask” questions:

What other characters have you seen show up?

And I can certainly think of times I have played most of these roles. It is hard to meet someone you revere and think clear enough to ask a decent question.

Alain did a brilliant job of dealing with each of these characters as they showed up to “ask” a question. For bonus points he would even answer a two part question to completion, even if answering the first part led him through a story. He was gracious and good natured. A model of elegance. If I achieve such a level of skill when I am twice his age, I will be quite happy.

How to Ask a Question 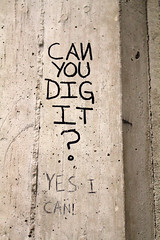 When I read How to Ask a Question in the Chronicle, I thought it would be useful to summarize for you here:

We are here to learn from and with each other. Let’s foster a question/answer culture that promotes it.

ps. most of these “ask a question” points also apply to conversations and apply broadly. 😉

One thought on “The Art of Dialogue in Public Space”