What is the story we tell about people in this Darwinian world where capitalism dominates the ideology? Traditional western economics, dating back to Adam Smith describes humans as rational self-interested creatures. Being kind to others is assumed to be driven by selfish motivations, for example, creating obligations of reciprocity. However, neuroscience reveals the phenomenon in the brain around empathy and generosity. Humans are wired to be kind. The fields of behavioral economics and positive psychology radically alter the story of who we are as individuals and how we interact together. A thrivable world is more possible when we operate under the belief and assumption that people care, act from a place of empathy, and seek meaning-making. We also become self-aware of how predictably irrational we are, allowing us to adjust our systems to nudge us toward the outcomes we consciously want. The increased wisdom in how irrational we are allows us to be more intentional about how we do what we do.

We are driven by much more than greed and profit. In fact, we are predictably irrational, easily swayed, nudged, and influenced. What we may learn and adapt about ourselves is priceless. We even discover new ways to navigate cheating and stealing! (video link)

Dan Pink tells us in Drive: The Surprising Truth About What Motivates Us (video also) that while financial rewards may motivate better performance on mechanical tasks; they don’t on creative tasks. Instead, we are driven by our desire to be autonomous, masters of our work, and full of purpose. We do things for a reason we believe in. We like to get better and better at things we do, and we want to be self-directed. If we know this about ourselves and others, what will that enable us to do now that we could not do before?

Iain McGilchrist describes the consequences of how our brains work and what that has produced in the world with his book, The Master and His Emissary where he points to how left-brained linear rational actor thinking has led to the world we have now. Dan Pink also talks about a Whole New Mind, naming six right-brained abilities we need to evolve for the economies of the future. They are: design, story, symphony, empathy, play, and meaning. 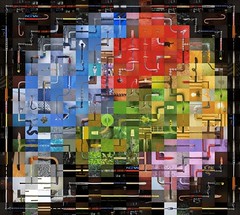 After ages of focusing on illness, psychology has refocused (at least in part) on positive psychology (the scientific study of human flourishing). Recent research reveals more about altruism, The Compassionate Instinct, and authentic happiness. In fact, Jonathan Haidt proclaims that we are Wired to be Inspired.

We also understand more about the conditions we need for productive and joyful work or flow experiences from Mihaly Csikszentmihalyi, the author of Flow: The Psychology of Optimal Experience and the Evolving Self. (video also)

For a century or more, Intelligence Quotient (IQ) has been a primary measure of a person’s potential. However, it has both shown that high IQ does not produce happiness or success. It has also been shown that emotional intelligence and other forms of knowing also influence an individuals potential. Howard Gardner’s work on Multiple Intelligences point to many ways intelligence appears in individuals. Dan Goleman focuses specifically on Emotional Intelligence, although more recently he has written about Ecological Intelligence. Recently science has shown that brain cells are not only located in the head, but this tissue is also present in heart, gut, and other areas of the body. What world can we create when we acknowledge the full spectrum of our intelligence and awareness? Does the recognition of multiple forms of intelligence entice greater curiosity and creativity? Learning how to make our brains more plastic fosters transformation through increased flexibility, growth, and integration. What thrivable world becomes possible with these expanded and acknowledged capabilities when we honor and embrace them?

Understanding ourselves as empathic and connected beings in search of meaning and purpose enables us to design our world in new ways. While there will still be zero-sum games and times when we act from greed or scarcity, there is a growing possibility of acting from trust, altruism with autonomy for a greater purpose operating from a place of abundance. We tap into a greater sense and breadth of our intelligence. And we know more about what makes people happy and fulfilled.

2 thoughts on “Breakthroughs for a Thrivable World Part 2”