The question is “How does it happen?” And also “How can we encourage it to happen?”

Questions I have been pondering for years now: what brings about an aha? what gets people to shift? how to get unstuck and take action?

Which is something I have been reflecting on since my early days of working with Drake Zimmerman on coaching and philanthropy. Or maybe it comes before that…going back into my childhood when I became fascinated by the brain (thanks PBS). In any case, it all came up again earlier this month when I sat down at a cafe with Clay Shirky. We had a powerful hour of mutual brain picking. He said he had just finished writing his next book and a question he was still mulling over was how do we get people to move between these spaces he had discerned and laid out for me. 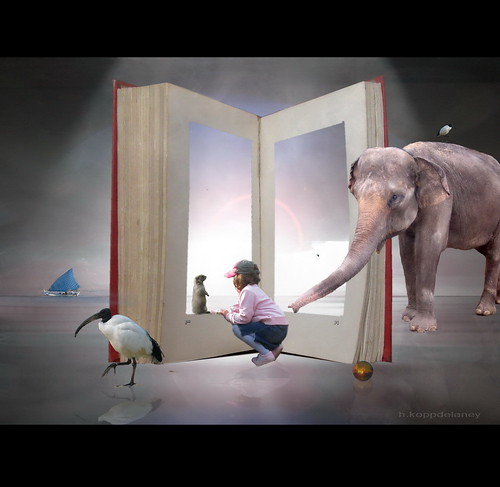 Aha’s are those bright moments where the light bulbs flash on in the brain, and we suddenly see something in a way we had not seen it before. Sometimes this happens when we have a near death experience or a cherished one is ill or dies. Maybe it is a near miss or a sudden revelation. It can come from stillness and reflection. @SusanLipshutz shares, “Sometimes awakening, clarity comes from getting shaken up via an activating event that threatens the comfort zone, opens heart~”

@butyes declares, “an aha actually IS a shift–it’s the FEELING of an insight which changes the situation–and may make action possible.” So aha’s are a form of shifting, but not the only form. Shifting can also happen through determination and persistence. We can shift our habits. We can shift our views through reasoned argument. Sometimes shift is what gets us unstuck from the place we are or the way we are.

So I asked – what gets people to shift and take action. And the response was so useful, let me share it with you here.

Pain and the Away-From

Some people pointed to what gets us to wake up and move away from something. For example, @philwoodford said, “Usually a metaphorical gun barrel pointing at someone, in my experience.” Similarly, @brainsturbator asserts, “System Shock is the Currency of Consciousness Change. Why does the roshi smack the seeker?” Perhaps even an accumulation of is necessary, as @ValdisKrebs describes, ” enough knowledge/pain/processing have to accumulate for a tipping point or a spark to lead to aha/action.” And @nicolerufuku shared that “rock bottom forces a shift.”

Personally I don’t think we give enough respect to hitting our rock bottoms. For me they have been rich places for remaking myself and give me a lot of courage to take on new challenges (as I know I can survive failure).

@OctaviaMoon suggests that it can take a variety of things, “bottoms, even highs, loves, money….spiritual awakenings.” She goes on to say that, “yoga is a beautiful thing…takes you into the body where you might be stuck and makes things less literal.”

What I was expecting to hear from others but didn’t was something about carrots. I hear the pain and sticks method can work. Do carrots work too? Can we lure people to shift and get unstuck?

Sometimes shifting is about not looking directly at what needs to change, instead it is about letting the mind rest. I think of this as letting the unconscious resolve things by putting the conscious mind elsewhere. @gordondym replied, “For me, it’s shifting attention to something simple, and/or thinking of something completely unrelated.” @butyes speaks to the emergent shift from another angle when she says, “but the aha itself–that often comes when one becomes still on the other side of worrying at the problem. In stillness there’s room to sense a little niggling glimmering something, and sit quietly with it, until, ‘oh!'”

While we may not want to cultivate the negative experiences that can make us shift, and perhaps we want to be more active than allowing an emergent shift, what can we do for ourselves and others to foster shift and get unstuck?

@HollyE4S offered a series of conditions that can help shifts happen:

Which reminded me of something I think I was first exposed to from @ken_homer and comes out of world cafe – find and take “a simple elegant next step.”

Looking back on my training as a coach, it feels like so much of our training was in developing competency with tools to help people shift or get unstuck – modifying beliefs, shifting frames and seeing multiple perspectives. I will review some of those in a post just for that.

What other ways to notice shift happening? And what can we do to spark it?